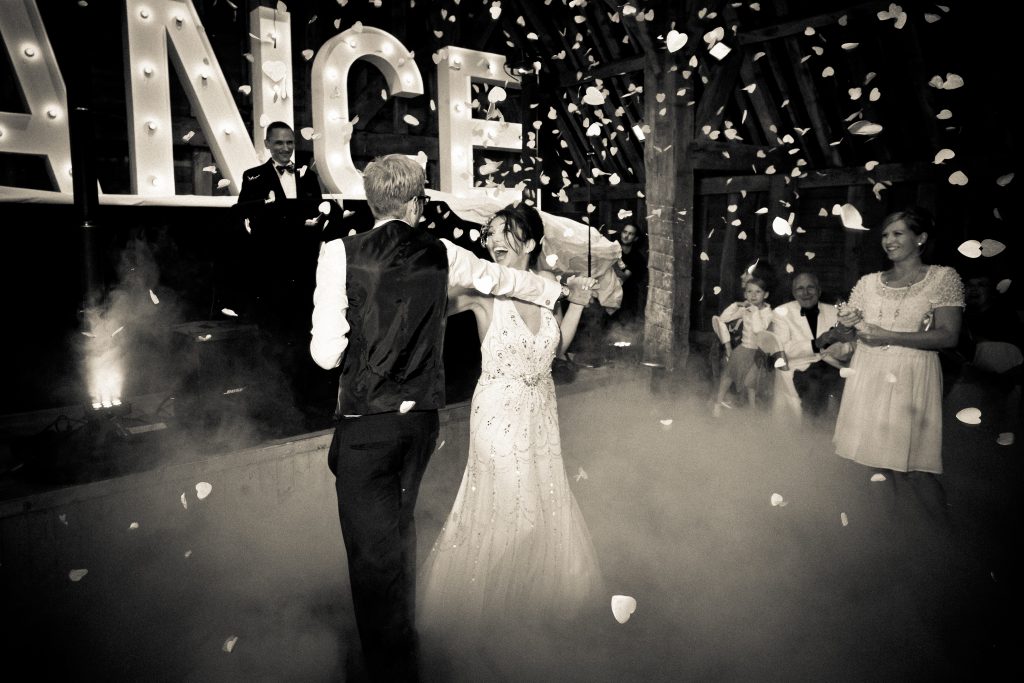 There’s a reason why I was awarded UK Wedding DJ of the Year.

With a music selection to enthrall everyone from teens to the grandparents.

My style is to let the music do the talking. I am an expert at reading the crowd and knowing what to play to create a fantastic atmosphere and being a former international club DJ, I have the mixing skills to seamlessly mix the tracks into each other.

My music collection is eclectic and extensive, as is my music knowledge.

Tony is more than just a DJ – he’s your toastmaster/wedding planner/general hands-on guy on the day.

I am a trained Master of Ceremonies specialising in weddings. I deliver weddings that are elegant and romantic, and above all, FUN!

I carry out these elements of the day with far less formality than a traditional Toastmaster, and with no stuffiness! Where possible, I will also infuse music – and of course fun –into everything I do.

How I differ from a traditional Toastmaster

When guests are mingling in the venue gardens for the drinks reception, a traditional Toastmaster will shout at everyone to get them to go through into the main building for the wedding breakfast.

By contrast, I will discreetly go up to each group of people and inform them quietly that the meal will soon be commencing. I’ll also direct them where to go.

As your MC, I keep the day running to schedule and carry out all the usual Toastmaster tasks – but without shouting at your guests, as it’s simply not necessary!

There will never be a moment when people are sitting around wondering what’s happening next, as I will keep everyone informed in a friendly and personal way.

I will suggest a variety of ways to help break the ice and inject bursts of laughter. What you choose will depend on your personality.

Arrange a meeting with Tony to discuss making your wedding fun for you and your guests.

CHOOSE TONY AS YOUR WEDDING MC

Many couples have booked me to look after the music for the ceremony.

If necessary I can supply the sound equipment and arrive at the venue, at least an hour before the ceremony begins in order to position both myself and the equipment where it is out of the line of sight as much as possible, and certainly will not obscure photos being taken.

You may wish to have me play suitable music during the drinks reception, at a volume conducive to conversation yet adding a nice atmosphere.

…you want Tony Winyard as your celebrant.

I provided the music at hundreds of weddings. I witnessed countless registrars and celebrants deliver traditional ceremonies. But they could be solemn and boring. So I offered couples a wedding that would be a lot more fun.

I believe that wedding ceremonies should be fun as well as elegant and romantic.

As your celebrant, I ensure that the guests are touched by a moving ceremony, and also moved to tears of laughter.I qualified as a celebrant with Civil Ceremonies Ltd and have undertaken considerable training in professional speaking, improvisation, stand-up comedy and as a Master of Ceremonies. I continue to develop my knowledge and skills on an ongoing basis. 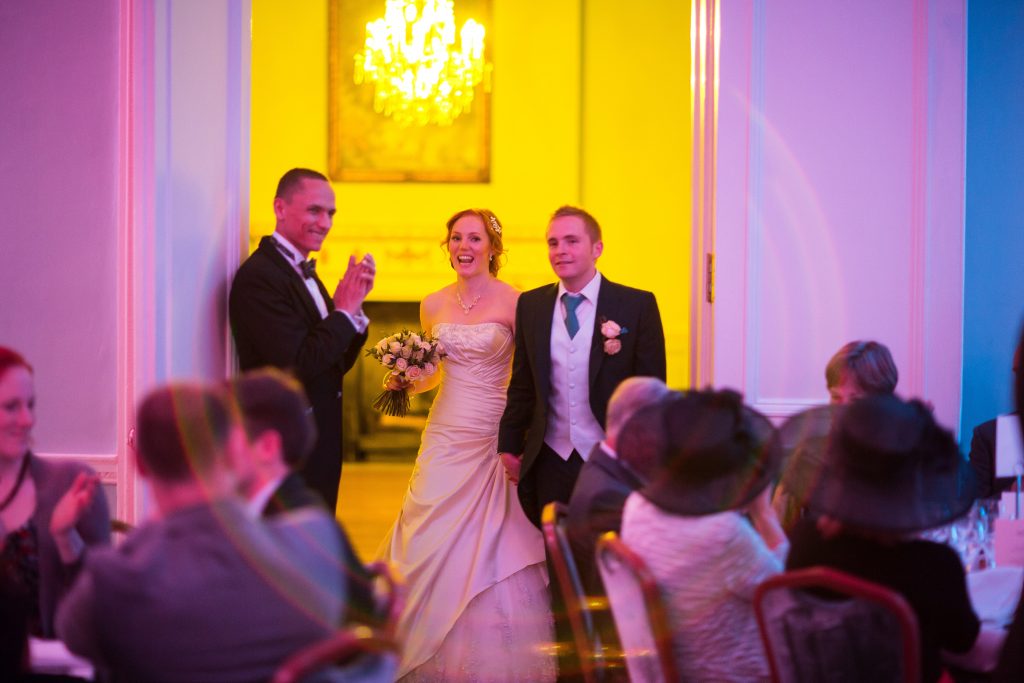 Most of the couples that book my services want their weddings to be fun for themselves, their friends and families. Over the past couple of decades of performing at so many weddings, I have discovered many different ways to inject fun into people’s day.

Some couples were quite introverted and didn’t want to be the centre of attention, while others were the opposite with many people in between those, and so I learnt to deliver many of the services in unique styles depending on the couple’s personalities.

Below is an example of some of the services I offer that can transform a wedding.

To be asked to be a bridesmaid or usher at a good friend’s wedding is a real privilege. Yet, at many weddings, guests can go through the whole day without knowing anything about you or the other members of the wedding party.

To overcome this issue (and add an element of fun) I often suggest that couples include personalised introductions for each person in the wedding party. This means that all the guests get to know the name of each person in the wedding party, plus something interesting and humorous about them. This usually results in laughter, and creates a great energy in the room. As we all know, there is no better method of ice breaking than laughter!

Below is a video containing some introductions of the wedding party from previous weddings.

When done correctly, the telling of the married couple’s Love Story can be one highlight of any wedding. To deliver it properly requires skill in a few different areas. Many DJs/MCs have discovered the hard way that trying to tell an effective Love Story without undertaking the necessary training can result in terrible consequences.

In order to share your story in a way that is touching, informative and hilarious, I trained extensively to sharpen my skills. I’ve taken courses with Mark Ferrell – the original creator of The Love Story for weddings–as well as doing many workshops in storytelling, scriptwriting, comedy and improv.

Within the past ten years, I’ve also delivered over 100 speeches at Toastmasters International, and did over 20 gigs as a stand-up comedian on the London comedy open mic circuit, all to improve my ability to deliver a great Love Story for the couples I work with.

To compile your story, I find out information from the bride and groom separately (so neither is sure what the other has said). I then use that information to create a script, paying careful attention to the words used.

Every Love Story is different. For one couple, the story might concentrate on how they met. Another may focus on the proposal. Another might look at a breakup and reunion that was pivotal in the relationship.

The one thing that every story has in common is that I make it personal to each different couple. This ensures that each story includes sentimental touching moments that move the audience, as well as hilarious moments that get some real belly laughs.

Another way to generate fun into a wedding is with some games. One game that often goes down well is the Mr & Mrs Game, also known as The Shoe Game, which tests how well the newlyweds know each other.

Traditionally, the couple sits back to back, each holding one of their own shoes and one shoe from the other person. They then answer questions by holding up the shoe of the person they feel the question is most applicable to.

For example, if the question is “who is the best driver?” the bride may hold up her shoe while the groom holds up his own shoe. This, of course, results in much laughter and comment from the audience.

A twist that I sometimes do is to include a few other couples along with the bride and groom, such as the best man and his partner, the bridesmaid(s) and partner(s), maybe the parents and so on.

Lower down this page is a video showing the Mr & Mrs game at a wedding.

Photo booths have pros and cons when it comes to a wedding. The pros are that the guests can get some fun photos of themselves but one of the cons is that they tend to take people away from the dancefloor area, especially when the photo booth is located in a separate room and thus dividing the party.

The Selfie Wizard is a system that allows you and your guests to upload any photos they take to the screen on the front of my DJ booth, so everyone can view the photos..

I send all the photos to you the following day for you to keep. So it has much more flexibility than a photo booth and also allows guests (and your photographer) to upload photos from the ceremony and other moments from earlier in the day on to the screen, for everyone to see.

Who has the better music taste between you and your fiancé? Which one of you could rock the floor the best if you both picked 3 killer songs?

The above is a hypothetical scenario, but how about we put that to the test?

When your song is played you go behind the DJ booth, and as far as your guests are concerned; your spinning the tunes, then as your fiancé’s song comes on they go behind the booth. You both keep swapping.

Meanwhile, your guests will all have been given double-sided placards to wave at you. On one side are positive enthusiastic comments such as “Tune”, “Rewind”, “Wicked” etc. On the other side are not so positive, such as “Go home”, “boo”, “terrible”. While I’m using the microphone to ask the crowd who they think is the better DJ out of the two of you and encouraging them to show what they think. At the end of the 6 songs, the crowd votes who was the winner of the DJ battle!